All of this is “allegedly”, but where there’s smoke, there is fire people! There needs to be a mass purge of Hollywood exec because THEY ALL KNEW. They knew about Weinstein, they knew about Spacey and now its finally revealed, the king pin of Children’s entertainment, Dan”Wanna Be a Star? Get in the Car” Schneider was fired from Nickelodeon for “Past allegations of abuse”, according to Deadline. Who is the ONLY news source that reported on his creepiness. Loved how they carefully worded that. Anyone who lurks the web and gossip blogs has known this for years.

In my “Times Up”Article last month, I legit warned y’all about him. I’m honestly “Thats So Raven”. This is a topic I’ve wanted to write about for a while but was afraid of a lawsuit. But now the cat is out of the bag! However, I have been dropping hints on my Instagram Stories. Dan Schneider is the definition of too big to stop. He legit has made almost every popular Nickelodeon show, “All That”, “Drake & Josh”, & “iCarly”, this man has made them all. That’s why this was kept a secret for so long, That’s why they allowed these children’s lives to be destroyed. I am BEYOND done with Hollywood allowing pervs to get away just because they’re making the studio money, WELL IT ENDS NOW, its officially exposing season.

Watch any Dan Schneider shows and tell me they aren’t creepy. Tell me he doesn’t have a foot fetish, tell me he doesn’t put young girls in “adult” situations on his shows. Why did the media stay silent on this? These stories were all over social media and the news was SILENT! Not even a blurb mentioning how creepy it was when he asked young girls to send him pictures of their feet on twitter. The feet thing is the creepiest part because it’s so open on his shows and on Twitter. He is that ballsy. Read the tweets below and tell me you didn’t get the chills. 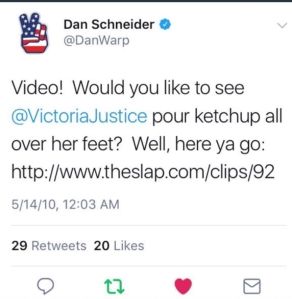 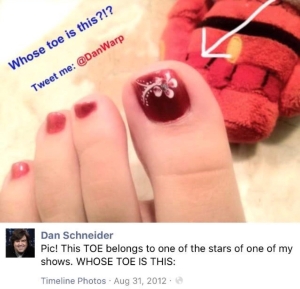 If you watch past episodes you notice that people who are popular with fans, get canned like the girl from season 1 on Zoey 101, Alexa Nikolas. Everyone loved her and she was canned for no reason, did she say no to him? Did she know too much? Its events like these that make you go back and question EVERYTHING. Why did only losers(like me) on the internet see signs of this but no one else did? Or they did and were paid to shut the hell up.

In, 2014 Jennette McCurdy didn’t attend the Kids Choice Awards due to, “Miss-treatment by Nickelodeon”. Also at the same event, Dan Schneider was receiving a lifetime achievement award. Did she speak out against him and get punished for it? Is that why she didn’t attend? THE DOTS ARE FINALLY CONNECTING. I will sit back and wait for these former co-workers of him to come forward. And hug & embrace them. Coming forward and risking your career is legit the hardest thing to do.

Need further proof? Look up Dan’s BFF Brian Peck, a former actor and dialogue coach who went to jail for two counts of abusing a Nickelodeon Child actor….LIKE IS THIS A JOKE! He worked on, “School of Rock” where he found…..Nick’s new star Miranda Cosgrove of “Drake & Josh” fame, A DAN Schneider Production. Legit these people groom these kids for their friends its beyond creepy. Gets even better thou, since BRAD was released from jail he worked on a DISNEY SHOW! All of Hollywood supports this, makes you wonder if Pizzagate is true (thats a dark web you will be lost down for weeks).

The most messed up Dan Schneider conspiracy is that he’s the father of Jamie Lynn Spears baby. Think about it…. she was on his show and.her sister Britney had her mental break down right after she has the kid. I’m pretty sure it has never been stated who the father is and notice how she never went back to Hollywood again? Was her family blackmailed into shutting up? This whole story could legit be a movie.

Now the one thing that makes me the most emotional is the Amanda Bynes part of this story. Victims of sexual assault tend to have mental break downs later on in life because of the trauma of what happened to them. Is this why Amanda went thru her random legit psychotic breakdown? In her Twitter rants she would speak about her father and others raping and molesting her, maybe she didn’t mean her real father….but her “TV” father, the one who discovered her, Dan “Show me your feet” Schneider.

Lastly, Amanda Bynes and others where discovered on “Nick’s Funniest kid in America” a contest for a role on Dan’s show, “All That”. Was this to actually find a new “Star” or was this just to groom children for Dan. The British version of Dan is Jimmy Saville, that story will honestly make you barf. He legit was the host of a children’s show….and did children charities….after his death it was revealed HE WAS A MONSTER. He raped and molested thousand of children and the BBC (a government ran company) KNEW. They all covered it up, why? BECAUSE HE WAS MAKING THEM MONEY. I’m so over this stuff it makes me sick to my stomach, how about we drain the Hollywood cesspool swamp? You hurt a child you describe to die, our nations laws on child abuse are a joke. BURN THEM ALL ALIVE.  More stories will come out and as always, SirDutches.com WILL REPORT ON THEM. You can’t sue a man who’s already poor.