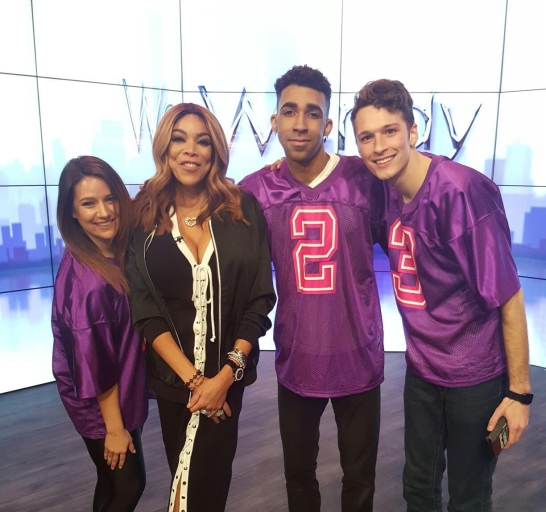 Anyone who knows me, knows Wendy Williams isn’t JUST another television host to me. She more like my spiritual television guru. I GET it all from this girl, comic relief, great stories, AMAZING guests and finally, Hot Topics. The best 15 minutes of television, that should honestly be treated with the same respect as a Presidential address. Hot Topics covers it all, like when Blac Chyna and Rob Kardashians heifer ass was beefing, Wendy deadass was about to leave her vacation early to cover it. THAT’S HOW IMPORTANT THIS IS TO HER. Theres something about watching her spill that TEA, well legit sipping her tea that gives me a rush of excitement. Its honestly sad that I have to get my celebrity gossip from a entertainment personality because I cant trust the nasty news.
Every year Wendy does a “Super Bowl End Zone”contest and its like God WANTED me to be apart of it. Two years ago I sent in a random fun video and while I was on a ski trip I got a call from the producer! SHE LOVED DADDY! She wanted me to film a new video that was even sassier, well I got too drunk & fucked that up, so they went with someone else. It was like in my head I looked so sexy with a leather coat on but after I watched it I looked like a nasty drunk slob trying to hard to get some attention in the club.

HOWEVER, a year later I get another call (love how they remembered me). They wanted another video that showed off my fun & sassy,sober side. I did it and honestly it was Oscar worthy. Not only do I have a fun intro and an AMAZING dance but I also included Bloopers! HOW creative am I?! They loved it, but wanted another F-ing video to show “I can dance without using a wall to grind on”. Umm okay(eyeroll). I’m convinced they just wanted more videos of me dancing just to giggle at. They MUST have a file of just me at this point.

So after two years of drama,I finally get the call, I WAS PICKED! I honestly felt like the prettiest girl in the school winning homecoming queen. I was beyond blessed! My baby girl Courtney lives in NYC and legit right next to the studio. So I took a Greyhound down to start my New York City adventure! I arrived at night and woke up hella early the next day because sadly I had to be there by 9am. This was for the Friday show, which they tape on Thursday because Wendy is a boss bitch and does every other show live, but damn it she wants her Fridays off.

With my nerves getting at me, I had one too many mimosas. I was feeling a little buzzed but confident like Courtney after she would stuff her bra in middle school. When I showed up they asked “If I was feeling okay” lmao yeah but I would KILL for a Xanax. We went to the dressing room but because I had a super secret sexy outfit to put on I was put in Dr. Phil’s room for a hot min. Sadly, I didnt meet him. I wanted to pitch him a story idea about my trashy “part” of the family and their INSANE legal drama. But I guess he was too busy doing GOD knows what.
We had dress rehearsal and thats when I discovered the cold, hearted truth. LEGIT EVERYONE IS A PROFESSIONAL DANCER BUT ME. I was beyond shook. I thought this was just going to be a fun little dance off, like in the club. Not “So You Think You Can Dance”, where I’m the dumbass who can’t dance but shows up all confident like I’m the Beyonce of dancing. Aka the joke audition. They must of been training for this for weeks.

Meanwhile my buzzed ass shows up and planned on just “Winging it”. Yeah the producers were beyond pissed, they made me go in the basement with a producer and make up a dance hella quick. It was so embarrassing lol, like I’m sorry I didn’t know Wendy took her “Super Bowl End Zone” contest that serious. I was legit in a cold ass basement trying to come up with a dance that shows off my best asset, my ass.
So my new home girl and I create a quick/cute dance that really allowed me to work with what my mama gave me. We finally go out on stage to film it and legit the room is smaller then you think. I really wasn’t that nervous either because of the buzz I had going on or because I was born to shine. Sadly, I lost but it was a blessing! Because the cost of the TV, Grill and $500 gift card I would of won, would of put me over the taxed line. So I would of had to pay taxes on that shit, NO THANK YOU! I did win a “Sorry your ass at dancing” prize of a new 4K TV that somehow I was manipulated into giving it to my parents. So my mother can watch her Hallmark movies in 4K. No one should be allowed to watch TV in that high of a resolution, I legit can see the actors make-up lines, so disturbing.

There was some backstage drama that I’am still annoyed with to this day. I was the ONLY one who asked the producer for a picture with Wendy and SOMEHOW the other two basically photo bombed it! I wanted an AMAZING solo pic of just Wendy and I to put on a t-shirt, coffee mug and a blanket but THEY had to be selfish and ruin it. Like wtf they don’t even know her horoscope sign!
Because I was hyped about my AMAZING day, my girlies and I went out for drinks where we met my sister and her trashy friend. We laughed, drank, ate & celebrated daddy FINALY meeting his baby girl. We drank a little too much and it was stuggle city at 6:30am the next day to get up for my 7:20am bus. Needless to say I missed that bus and learned about Greyhounds lovely NO REFUNDs policy………assholes. So I had to spend another $50 dollars to get home, just to find out I didn’t even work that day….how dumb am I. God always be playing pranks on me! Silly boy.

Xoxo How YOU doin?