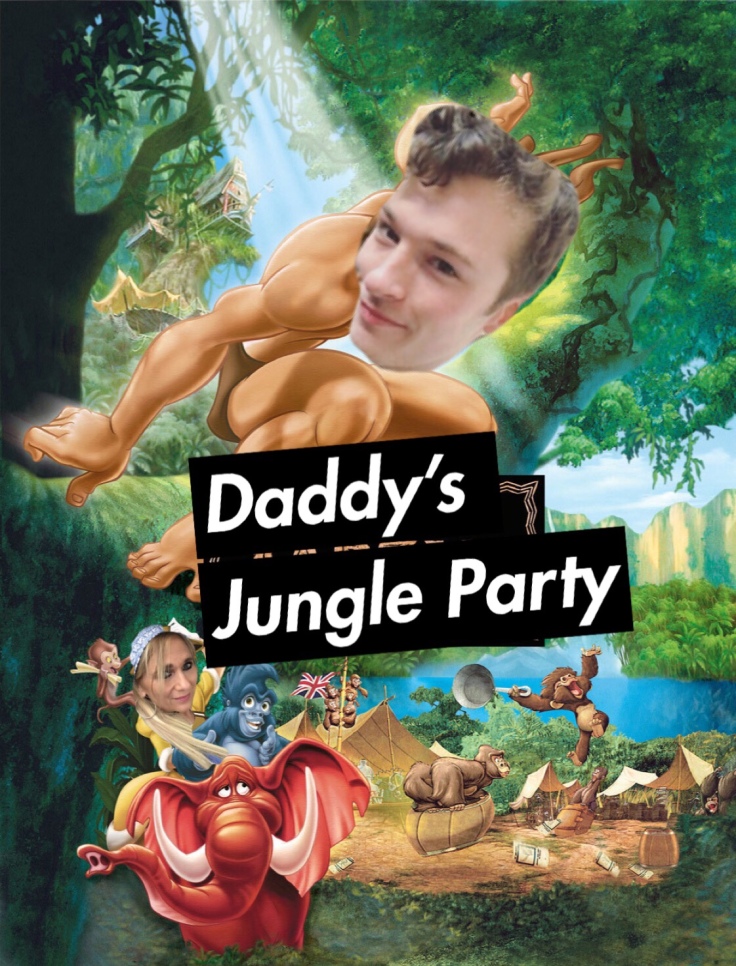 As promised, the tale of my AMAZING jungle themed party. So if you’re fake and didn’t read my article yesterday, I’ll give your basic ass a little recap. Basically my yearbook club trip to Penn State was canceled because of Jerry Sandusky’s pedo ass. The school didn’t believe it would look good if we “allowed the students to attend a school in the middle of a sex abuse scandal”. Oh now people care?

I was excited AF for this trip and had many plans for it. I was NOT going to let a pedo creep ruin my weekend. My parents were visiting my sister at college that weekend and if I didn’t go to penn state they would of dragged my ass with them. HELL NO! I decided I need to come up with an AMAZING master plan.

I typed up a fake permission slip and told my parents the field trip was still on. They either believed me or wanted to get rid of me. Either way it worked! They planned on leaving for my sister college at 9am so I had my friend pick me up at 730am to “make the bus”, the amount of thought that went into this was remarkable.

As soon as I had confirmation via my younger brother my parents left, the decorating began. I throw AMAZING parties, always with a theme and some drama. Boy did this party have both! My girlies Lil Hotdog 16 and Double D’s Dre came over and legit turned my house into a tropical jungle. With vines, palm trees, lights and even animal noises. This house was LEGIT!

My house had at least 90 people in it as I invited the whole grade. Well almost the whole grade, the people who didn’t amuse me were NOT invited. I even had my friend Mike watch the door with a list of who was invited. This isn’t Walmart, I want only the best in my house.

As the party started, legit I knew this was going to be memorable. At first I was like a Nazi. Legit telling people to keep it quite. Finally after 2 hours I decided daddy deserves to have some fun, boy was that a mistake. After about two shots and a hit of the L, I got a call from my behind neighbors……who also works at my high school. FML!

I run outside to it’s quite and answer the phone….. “hello?”. “WHO’s AT YOUR HOUSE”. I legit was shaking, “I came to get my retainer, I’m leaving now”. At first my neighbor was like okay that’s fine just turn the lights off because they saw movement upstairs. Then his wife starts screaming “we’re coming over NOW”. I legit wish my life was a reality show because they next scene is beyond hilarious.

I run in, rip the AUX cord out and scream “MY NEIGHBORS ARE COMING, HIDE EVERYTHING AND GET DOWNSTAIRS”. No joke I ripped so much decorations down and threw so much stuff downstairs, I honestly broke a sweat. I told everyone to shut up or DIE.

My neighbors came over and the first thing they see is a sign saying “Welcome to the Jungle”, she rips it down, also ripping down the blinds that was holding it up. Next they see all the decorations and go “Do not LIE, how many people are here”. Ummmm 5?

Then I hear mad giggles…… they go ,everyone down stairs COME UP NOW! Legit like a scene out of a movie, over 90 people come up from my basement. My neighbors faces were jaw dropped. The line NEVER ended it was non stop people. But remember my neighbor worked for the school so everyone’s covering their faces also lol it was so funny!

As people are trying to get ready to leave my neighbors are legit shoving them out the door, my one friend was wasted screamed “I can’t find my shoesssss” my other friend was pushed into a lamp and started to cry, it was honestly a shit show.

As my friends all left, my two girlies stayed behind to help clean, my neighbors are asking them all these questions so luckily they were smart and gave fake names, Amber & Lisa. Legit when my neighbors told my parents about the party they go “the only friends I liked were Amber & Lisa”. My parents legit go “ummmm who is that” lmaoooo.

Next they made me sleep at their house because they “didn’t trust me”! Me??? I’m sooo trustworthy! I woke up that next morning at 630am because their nephew had a swim race they were GOING to make me go too. I stopped that REAL QUICK, I go “I will honestly throw up in that pool if I go, DON’T test me”. They realized I was kidding and allowed me to go home, where I cleaned for the next 12 hours and awaited my fate.

When my parents came home it was the typical screaming which died down till they found “Dutch Guts” under their pillow. What asshole would do that? They also found a pill which my parents went nuts over, I DON’T do pills. DUH! My mum went to the pharmacy where she discovered it was Amoxicillin lmaooo. So geeked!

I was grounded for a hot min but the story isn’t over yet. Legit the next day at school I was called into the office. They wanted to know who was at the party. Well if I gave names there would legit be NO senior sports and people would of murdered me so I kept my mouth shut.

I had ZERO negative effect from this party, my younger brother on the other hand got the shit end of the stick. As he was trying out for the Lacrosse team, he legit was called out in front of the whole team. “Are you a party animal like your brother”. Mind you my brother is legit the opposite of me, quiet and not obnoxious like me. How unprofessional is that, to make it even better, he was THE ONLY ONE NOT TO MAKE THE TEAM. Legit even the kid with the gimpy leg made the team lmao. I kid you not everyone made the team but him. HOW FUCKED & CRUEL. It wasn’t even like he is shitty at sports like me, he’s actually good. I smell a conspiracy but MAYBE ITS JUST ME.

Xoxo the lacrosse coach was deff pissed he wasn’t invited