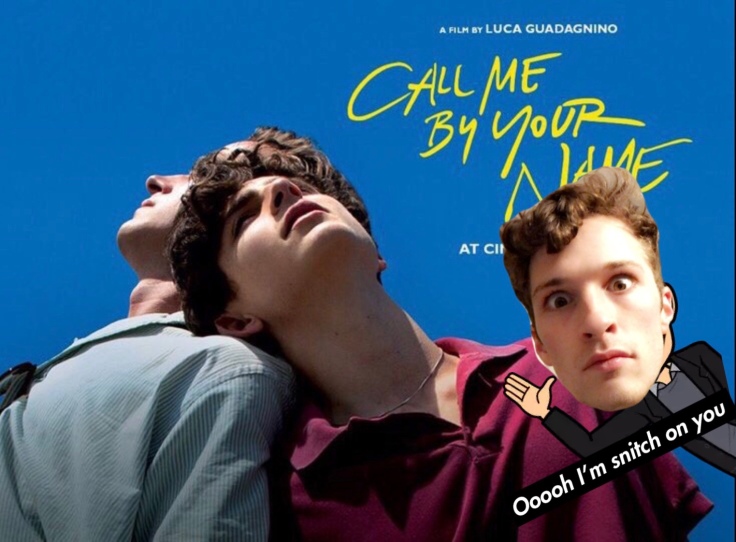 When I first heard of this film I was hyped. Hollywood was saying how it was a work of art gay love story without anyone dying of aids. I was like finally! Gay films either end with someone dying of aids or someone getting their ass jumped. It’s like WE GET IT, people hate homos. Such a played out storyline. When Hollywood gonna call me? I could make a whole mini series with the hook up stories I got.

This movie won maddddd awards and everyone was talking about how great it was. But the only opinion I trust is my own. So after it was on Starz, I sat down to review it MY self. And let me tell you, you feel dirty after watching it. Basically the premise is, a 17 year old BOY, Elio spends his summer in Italy cause his fam rich. His father is an professor and invites his 24 year old graduate student, Oliver to stay with them.

From the start there is sexual tension between Oliver and Elio but they both be fooling around with girls so you think nothing of it. Then Elio starts becoming a baby back moody bitch. Stealing Olivers bathing suit to legit smell it, you then watch him play with himself, its fucking weird! Like NORMAL movies hint at that shit, they don’t actually show someone legit putting their hands down their pants and play with themselves! This boy looks like he is 15, and thats being gracious. I just felt icky watching this, but I was like okay maybe this a one off scene, boy was I wrong.

The final straw was when Elio legit jerked off into a peach, yeah a fucking peach. Doesn’t that sting? Who wrote this? This is the MODERN day gay love story everyone being talking about? Bitch please. I could write a REAL gay love story that DOESN’T give you a pedo vibe. After he starts to un-pit the peach, he puts his dick into and goes to town. Again WTF who wrote this? Who does that shit? But then its gets even worse, Oliver comes in and finds the peach and starts to play with it and legit was about to eat it, I wanted to gag. I turned that shit off. I couldn’t handle this movie anymore.

I understand the need to create a film like this, to show a young gay boy falling in love but why couldn’t he of been 18, why you gotta make him 17. It make the whole film questionable. This just continues the narrative that gay people are low-key creeps, who prey on young boys. I wanna sit down with the whole crew of this film and ask, why? What confuses me even more is WHY no one else in Hollywood agrees with me. All the reviews rant and rave about this movie. It scored very high on Rotten Tomatoes so am I the only one who feels a type of way about this? I CANT BE!