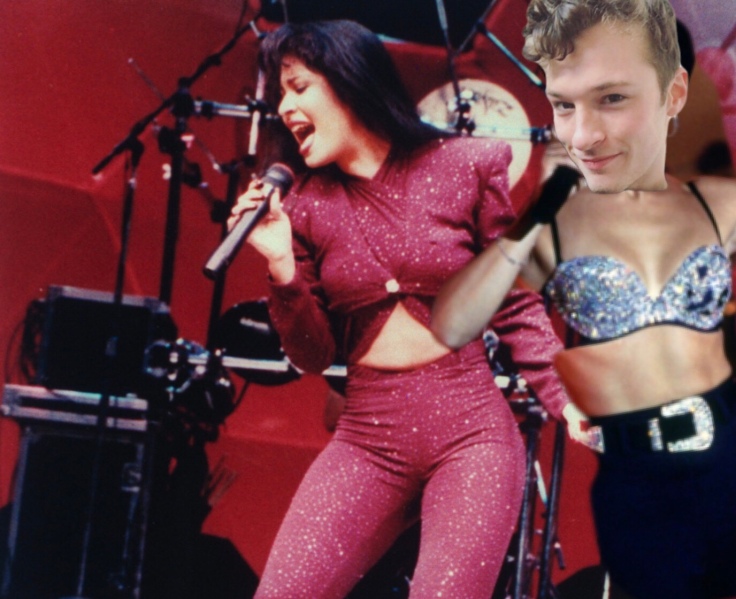 I’m watching the Selena movie( for at least the 10th time) and I suddenly got sad at how short her amazing career would of been. Legit she had the voice of an Angel and some fat cow ruined it, why god??? WHY! So cruel.

For those of you who are uncultured swine, Selena was a Mexican American goddess from Texas. Girl had it all, the looks, the voice and the moves. She died at the age of 23, right when he career was about to explode. Girl was hella famous in Mexico and America. Her dad would say that Mexican American have it rough because American food is bland and Mexican food gives them the shits.

Selena didn’t limit herself to just one group of fans, she wanted the world to be her audience. She spoke English and Spanish, I can barely speak English. I honestly think she would of been up there would Michael Jackson and Whitney Houston, but bigger. She could sing, dance and had no scandals! When you watched her performed you knew she was meant to be a star. I always think God does things for a reason, but I can’t find the  reasoning behind her death

Her death is the definition of fucked up. Another example of why you deadass can’t trust anyone. Her killer was her “friend” and manager of her clothing store, Selena Etc. This skank was named, Yolanda Saldívar a total psycho twat. At first Yolanda was fine, a fat slob yes, but no drama. Then like a possessive child with a toy, she started to become obsessed with Selena, I’m mean look at her, can you blame her. Yolanda started to fire anyone who was a threat to her. This turned working at the store into hell. The workers complained to Selena but she refused to believe Yolanda would hurt her business, girl you should of listened!

The workers then went to Selena’s dad to complain, and he took the threats seriously. Then after her fashion designers and friends complained she started to take it seriously. She was also the fan of Selena’s fan club but did nothing but take people’s money, what a scam artist. After some investigating, they discovered she stole over $30,000 from Selena’s fan club and stores. I would cut the bitch. Selena confronted her again but she claimed she was raped blah blah blah, what a lair. After Selena demanded the money and her business papers, that’s when the bitch shot her.

All over money, how fucked up. She destroyed a promising career, just because she was a scum bag bitch. I like to imagine a world where this didn’t happen. Her clothing store was already a hit, imagine if they went world wide. She would of been like the Beyoncé of her time, a legit empire. If you haven’t seen the Selena movie with Jennifer Lopez, hit me up, we can do movie night!