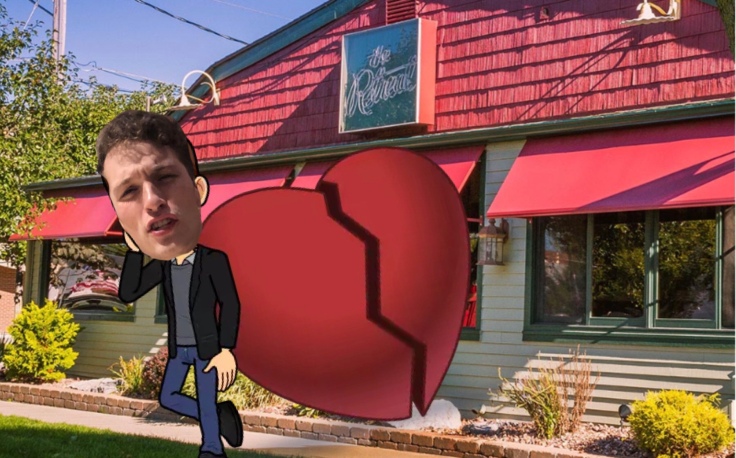 As the lifelong Queen Bitch of Liverpool, The Retreat is one of my favorite restaurants/bar. It’s not because of the food (because sometimes it’s ass), it’s because of the atmosphere. Legit during the summer that place is lit. It’s so CUTE out back with the lights and the couches, I feel like I’m on Vanderpump Rules. The Retreat is located in the heart of the village. Everyone goes to the retreat, legit everyone.

So when I heard this rumor about them closing I legit felt like part of my liver died. No more Tito’s & Soda with the gals? I went out for dinner 2 weeks ago with my baby girls. That’s when one of them dropped this bombshell like it was nothing. I gasped so loud, the whole restaurant got quite. I go BITCH WHAT? She said, “yeah my sugar daddies a developer and he heard the land was sold and it’s becoming a Walgreens”. Excuse me, we’re good. We don’t need a fucking Walgreens in the village. We get our meds at Wegmans.

Naturally I put on my best Nancy Drew outfit to see if this was real, so I instagrammed about it. Mad people reached out later and said they heard the same. But I’m like did you actually hear it or did you watch my Instagram story, don’t be like CNN. It wasn’t till a very reliable source, and no it’s not one of my girlies. I wouldn’t even trust them to tell me the weather. This person heard the land was sold to a developer to make apartments. Okay that’s even worse. We don’t need fucking apartments in the village. That will turn it from cute as shit village to Fulton.

If this is true my ass will be protesting the hell out of that spot. I’ll tell every person who wants to live there that it was made on ancient Indian burial ground. So have fun trying to sleep at night sis! Like where are we gonna eat, drink and gossip? Limp Lizard? That place can barely hold 10 people. I go with a squad at least 15 hoes deep.

I’m assuming the owner was offered mad money for this land IF ITS TRUE. Because why else sell! It’s always busy there and it’s not like the prices are cheap. I tried to call the village to ask but they told me to legit “get a life loser boy”. So they are DEFF not getting one of my new Sir Dutches Purple Panties. The village is being revitalize and I love it but not like this!