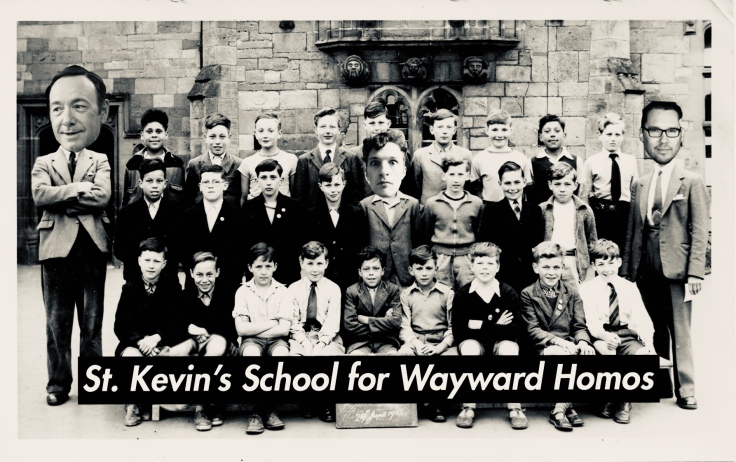 I was 16 when I was first sent to St. Kevin’s School for Wayward Homos.  This was after my father walked in on me watching “Sex and the City” thus causing his need to beat my ass while screaming, “No son of MY will ever be a Miranda”. Dad, everyone knows I’m a Samantha. As the son of a pastor, shame upon my father is shame upon my church. This is why he had to send me away. So he can rid me of the devils temptations. My whole church came together to pray me a safe trip as I boarded the plane. They were gracious enough to give me a care package of a bible, rosary beads, holy water to throw at lurking gays and a copy of playboy.

This camp is located deep in the backwoods of West Virginia. Because being alone in the woods with just God and dudes is the only way a gay can be cured. As I arrive I see everyone is wearing white crop tops with black khaki’s. A uniform hand picked by the head master, Kevin Spacey. Yes, Kevin Spacey the world renounced actor, I was just as confused as you were. He told me, no movie role can fulfill his true passion, to rid the worlds boys of homosexual tendencies. The daily schedule he provided me with had only three activities. Morning Prayers with Breakfast, intense one on one therapy time with Kevin and his assistant Bryan Singer, and Nighttime group mass in the shower. Every week ends with a night time mass with a large bonfire, where we burn gay pride flags and Lady Gaga CD’s.

As I enter my dorm I notice three things. No windows, cameras facing every bed and shackles on the bed. When I ask one of the boys in the room what the shackles are for, he says “for our protection against the gay spirits”. Seems legit.  As I set up my things I ask “how things are here”. They look at the cameras and say “amazing Mr. Spacey truly has saved us of our impure thoughts without him we would still be watching Glee”. As he says this he passes me a note, “kevin is gay”. I said, “dude I know….legit everyone knows”. When I asked what happened to the boy who’s bed I took he told me. “the fire saved him, & on Friday the fire will save me too”. A chill went down my back as I wondered, “where the hell am I”.

Okay now that I got your attention how juicy was that story, OMG I had chills too! Papi is SOOO creative when he’s baked. When is Hollywood gonna start buying my brilliant ideals? Stop yanking my chain. BTW if you steal this ideal I will sue you I save EVERY IP address that visits my website. But seriously Gay Conversion camps are so fucked up and honestly the gayest thing I have ever heard of. You want to rid a boys “homosexual thoughts” by having him live in the woods with only dudes and pray all day. Lmaooo okay hook up city?

These camps are ran by lowkey queers who just wanna be alone with boys for their own sick pleasure. I’m SO over people using MY God as a way to justify their fucked up mental state. Any parent who would subject their child to that is a piece of shit. No its not fake news, God IS judging you. I’m sorry but the whole being against gays because of the bible is wack. The bible also says to stone sluts, should I stone you for cheating on your husband? Also Jesus hung out with only dudes and a prostitute, literally just like every modern day gay.

Only 14 state out right ban gay conversion camps and others have bills in progress like New York. That is mind blowing to me. We literally are allowing children to be tortured, abused and molested by sick fucks as a way to “save them”. IS THIS REAL LIFE? WHY AREN’T PEOPLE TAKING ABOUT THIS? Currently in American over 77,000 children are in these camps and the media is silent because this isn’t something Trump did. This has been going on in America for decades. Whats even crazier, the conditions now seem like Disney World compared to how violent the camps used to be. People have died at these camp but I guess a dead son is better than a gay son.

I wanna make that story above into a horror film to bring awareness to how fucked up these places are. What got me on this topic is that new movie, “Boy Erased” starring my forever queen Nicole Kidman and Lucas Hedges who at times looks like at snack, other times he looks like he’s gonna choke me out. This movie is about a pastor that sends his son to a gay conversion camp. It looks so emotional so Oscar bait but I wanna make a horror film, something hella dark and twisted. And I wouldn’t even need to get that creative because fucked up shit really does happen at these camps. They play gay porn and legit electrocute you to mentally connect pain and being gay. OKAY What type of gay ass 50 shades of gray shit is that. Like I’m trying to make light of this but I could never imagine being subjected to legit torture like I’m some member of ISIS at Guantanamo Bay.

These camps are supposed to “Cure” kids from being gay but honestly its just making them mentally fucked up and in the end STILL GAY! Trust me being gay isn’t a choice. Who the hell would want their life to be a caravan of extra-ness.  Mad dirty looks, people always judging whispering prayers at you and honestly being viewed as a bigger disappointment than Johnny Manzel. No one wants that bullshit. So sending your child to those camps will only make you a worse parent than Caisy Anthony. Yeah I went their bitch.