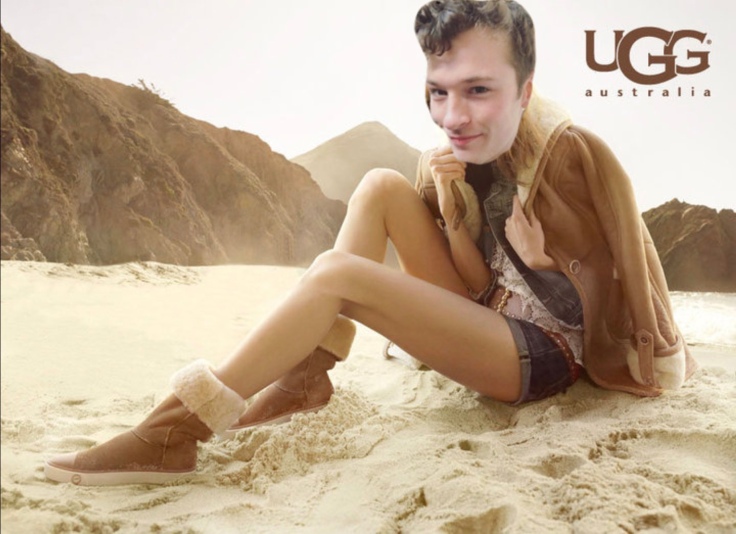 Can we give a round of applause to the team behind Uggs, everyone’s favorite boots besides PETA! Uggs could of been a one hit wonder brand, but instead they have positioned themselves for the future with new products like bedding and pet supplies. So random right, but when you think about it, its MAD smart. The OG Ugg boots were the hit with skanks in my high school. Dudes could quickly identify what girls were easy by seeing if they wore Uggs. If they looked new, GO FOR IT! She up for run and CLEAN! If they look old and have mad salt stains on them RUN! Also it was a great way to tell who’s basic and trashy.

Trashy bitches had Bearpaw, a nasty knockoff that turned your ankles green. Bearpaws at first look the same but the material is cheap as shit and looks like a flaccid dick  when they tilt over. Uggs at first were just for girls, but then they got smart and added mens. I love my Ugg moccasin, and I soo want the little booties, The tall ones look gay as shit but the little ones look like I got MONEEEY & 3 kids at home! Also they have leather boots that are type spunky, so yeah mad new shoes. Companies need to keep up with the changing markets but not cheapen their brand. Uggs added new product lines and didnt just lower the price, which floods the market with ghetto baby girls.  My favorite addition to the Ugg collection is the home line. They have the softest blankets, pillows, sheets, dog beds I have ever laid naked in. The materials they use is like from God himself.

This is what a company needs to do to evolve.  Unlike Toms or Sears, two companies who waited too long to evolve or never did. Toms is failing because instead of making a new product line or adapting their existing one,  they just stuck with that was popular and spent too much time on their charity efforts (which is nice but you need revenue to afford to be nice). Now their sales are in the tank and they cant keep up with the debt payments. But this could all turn around with one stupid ideal like Crocs. Crocs was a fad and their stores were closing left and right, but after a partnership with Post Malone, their sales are improving and they announced another shoe with him after the first sold out.

That was such a random but smart ideal. Toms should team up with me so I can revamp the whole line. Lets keep with the “Im a poor hipster” vibe but mix it with SPUNK. Nothing too gay. I picture them being the Patagonia of shoes.So in all, because of UGGs my baby girls are nice and warm having sex in a comforter warmer than their mans whole house.

Xoxo your dad got me Uggs for Christmas