I love me a good Podcast. From ones about my favorite Real Housewives (Watch What Crappens) to ones about History (Throughline). There is legit a podcast for everything, and the one I listened to last night got me all in my feelings. Crime Junkies is a new Podcast for me. I discovered them randomly while looking for something to freshen up my drive. I wanted something relaxing, not something that would force me down a rabbit hole of conspiracies about a young mans death.

This isn’t the first time I’ve heard about the Kendrick Johnson aka KJ case. Kendrick was a high school student at Lowndes High School in Valdosta, Georgia. On January 10th 2013 he went to school but never returned home. His mother called all around town and filed a missing persons report. As she was at the school the next day meeting with school administrators, she was alerted they found his body. 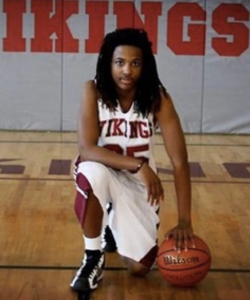 KJ was found headfirst in a rolled up wrestling mat in the high schools back gym. This was a smaller gym, behind the main gym, like the one I had in my High School. I don’t know about his school but at my school there was always someone in that gym. May it be a gym class or a sporting team or most likely kids messing around between classes. Someone was most likely always in there.

The police and the school immediately had a theory on what happened. KJ was storing his gym shoes, that he shared with another boy, in the wrestling mats. This was because the school charges you to use a gym locker, so fucked up. Before Christmas break, they cleaned the gym floors so the mats were picked up and placed vertical instead of horizontal. Weird the shoes didn’t fall out during that but hey, what do I know, I barely passed physics.

They claim he noticed they were placed upwards and he went in to get his shoes, but got stuck and couldn’t move. He then slowly died of positional asphyxia as the blood rushed to his brain and out his body. A few things that are wrong with that theory. A. why did no one hear him yell for help or see his feet out of the mat till the next day? Teenagers are nosy as shit, how would they not notice or hear that? Also the rolled up mat was 14 inches across, KJ was shoulder to shoulder was 19 inches across. How could he fit in a hole that small, while also holding on to his headphones? And why were the shoes, he was trying to get this whole time, have no blood on them? AND why was he found with another pair of schools stuffed next to his legs. 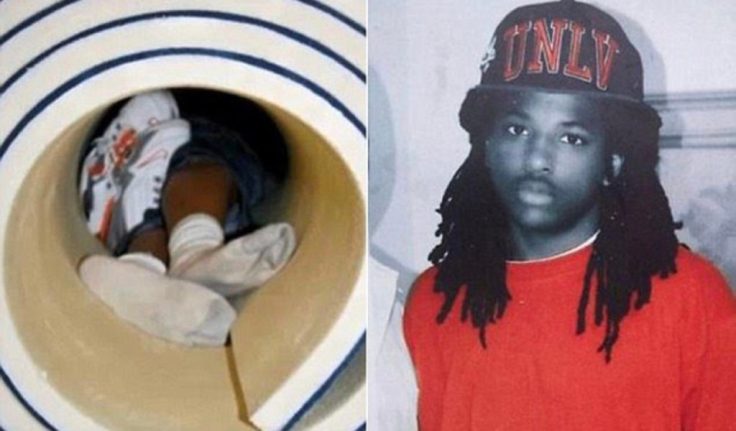 Literally they were sitting in a pool of blood but mysteriously had zero blood on them. SUSPECT. Also, why was there over an hour and a half of security camera footage “missing”. I’m sorry but that is a big ass red flag. I do understand that accidents do happen but there is wayyyyy too many fishy things regarding this case. Where there is smoke there is fire.

KJ’s family had to sue to get the footage which is normal due to federal law but what isn’t normal is how bad KJ’s face was. The police claim it is that bad due to the autopsy but nah I scream lies at that. Sure his face will be a little bruised from taking off the skin to get to the brain but his face legit looks beat in. As if he was punched in the face non stop, like during a fight.

The police said this was due to his autopsy but after a second autopsy it was revealed that KJ had bruising on his neck as well. The medical examiner believed it was from being hit by a blunt object. Also conveniently KJ’s organs were missing from his body and he was instead stuffed with newspapers. How disrespectful is that and also destruction of evidence.  But to this town its all super normal!

The family has a theory that another boy who KJ beefed with on the football team jumped him with his brother and they are the ones who killed KJ. One boy has an alibi that he was at a wrestling match the same time KJ died. BUT what time the bus left for the match is up to debate. They claim it was at 12 but a bus request said 4.

What makes this theory really suspect is these boys father works for the FBI. Is this a Hollywood movie or real life? I won’t say their names because I ain’t getting sued but a quick Google search will reveal whats good with them. HIGHLY SUSPECT!

I honestly have no clue what really happened. This case can go either way. But all the little weird things regarding this mystery kept me up last night. Well this and how crazy Game of Thrones was. Either way I really want to know the truth! If I could ask God one question it honestly would be this. Fuck discovering the meaning of life, I wanna know what really happened to KJ. His family deserves answers, the Georgia Bureau of Investigations opened up a new investigation but found nothing new. No shocker there. Cover up is a state wide affair.

His family had a 3rd autopsy preformed and it came back the same as the second time, death by blunt force object. The family was so desperate for answers they sued the school and the 2 brothers but sadly lost and was ordered to pay everyone’s legal fees. Another slap in the face. This family’s dedication to discovering the truth is family goals. They will not give up, to this day they are still trying to get answers.

There has got to be someone at that high school who knows what happened. It was rumored that the students were threatened with not graduating if they spoke up but not that shit has passed. This story has got to be haunting someone, man up and speak up.

Xoxo even if you think it was an accident, explain what happened to the camera footage?