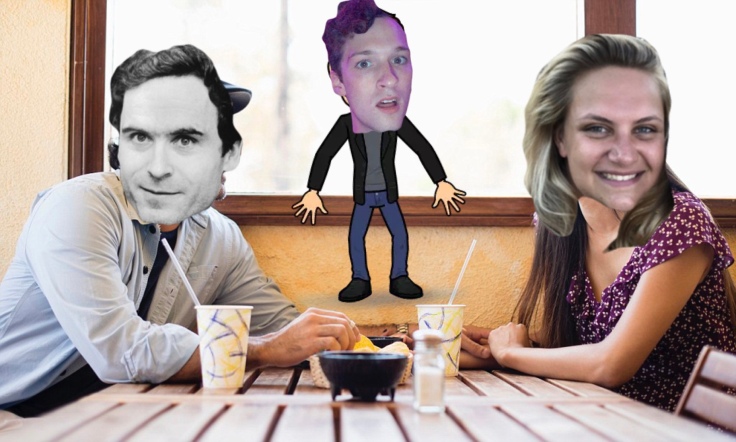 Ladies, Ladies, Ladies, you are too cute to be dating a potential serial killer. After watching the Ted Bundy movie, “Extremely Wicked, Shockingly Evil and Vile” (which sucked by the way, I wanted to see Zac get his hands dirty, NOT flirt), I am taking a second look at all my girlies relationships. Because y’all date some suspect ass dudes.

I understand you think he is obsessively protective of you because he “loves” you, but really its because he wants to slit your throat and bathe in your blood. You see after years of being alone, literally and physically (he smells like shit), he finally found “the one”. He will do what EVER it takes to not lose his “little princess”. Yeah he really calls her that, it gives me chills every time. I lowkey track her location and heart rate on her Apple Watch cause as soon as it stops my ass is racing over. I will beat his loser ass. Like he most likely beat hers.

Okay I am getting ahead of myself lets start from the beginning of the Law & Order: SVU love story. Home girl was minding her own at the bar, just sipping on her Titos Water when his lurking ass in a no name brand polo and jeans walks over. She must of been on molly because instead of telling him to fuck off creep, she entertains him. He is the definition of a “loner”. Sitting at the bar all alone, just planning his mass shooting.Any dude at the bar alone is a red flag.

He barely works, so in his free time, which is all the time, what the hell does he do? Is he peeping thru women’s windows at SU? Or is he hiding out in the women’s locker room at Planet Fitness. No grown ass man has that much free time on his hands and is NOT a serial killer. He doesn’t play video games nor does his dumb ass read so it’s like WTF does he do all day? Oh I know, think of ways to kill my Queen so they can be together forever. My baby girl works so like is he waiting outside her job all day just waiting for her to leave? Or is he in her apartment installing cameras and going thru her panties drawer?

When she went on vacay he was super salty and tried to convince her to stay because “he will miss her so much”. No it’s because he has zero friends and not even his parents want to chill with him. I told her, if you don’t get on that plane I will release the photos of you BEFORE the nose job. Like this shit isn’t cute it’s creepy. He wants to control and be with her 24/7, that is NOT normal. Not even married couples wanna be around each other that much. Learn about distance home boy.

I’ve currently been trying to figure out homeboys past. Does he have any ex girlfriends? Why did they break up? Where are his friends? Literally where are his friends? Did he kill them all? What was he like in High School? Did he have a squad? Or did he eat in the bathroom stall alone while everyone else took shits? These are all important questions! Ladies do research before you let ANYONE hit it. He ain’t even good looking so this must be some Voodoo shit. Baby girl is way too cute to be with all that mess.

I reached out to his parents for a sit down chat about their “little boy” but they have no messaged me back. Probably because their son reads all their messages( like he does to my girlie) and they are terrified to get on his bad side……again( like my girlie). There is something about his eyes that tell me he beats his moms ass. It’s like reverse Mommy’s Dearest. Instead of no wire hangers ever, its NO FRIENDS EVER.

I am giving this relationship till June, just to be nice. Ill let them have some “fun” while I watch from a distance, but as soon as he starts asking where I live and interferes with my weekends out with the gals, Ill end it right there. I’ll either frame him for murder or turn straight and steal his little princess away. No one, guy or girl can resist these cheek bones.

Xoxo I’m mentally tired from all my girlies dating deadbeats