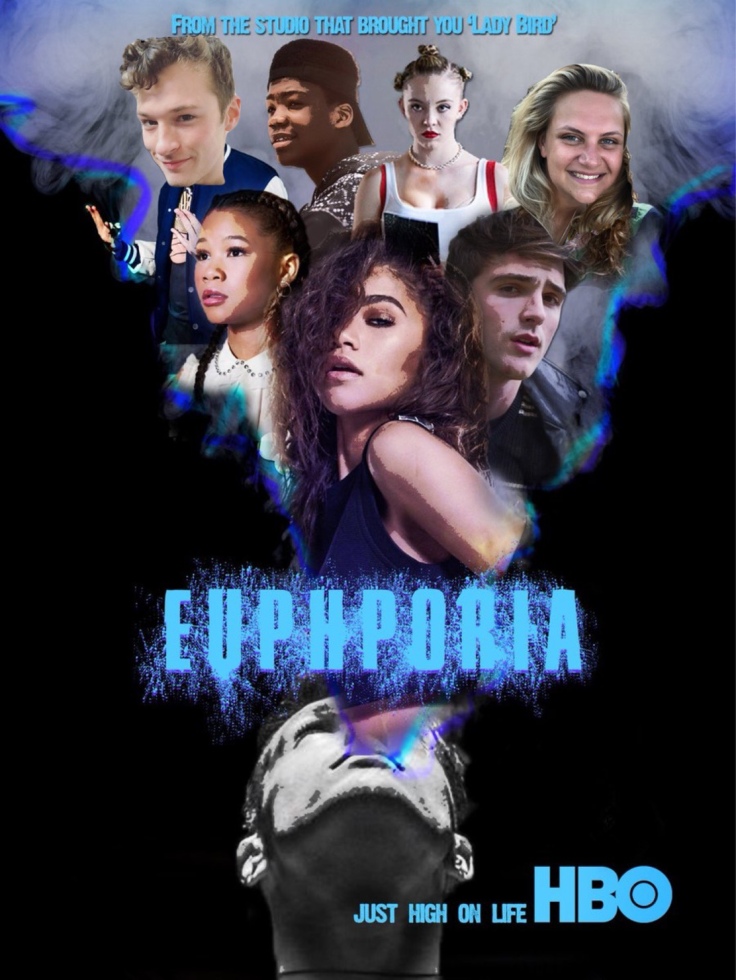 Euphoria is honestly a gift from the TV God’s, between the complex story lines, the music, the cinematography and the dicks, this show has it all! Seriously this show has MAD dicks in it. Long dicks, nasty dicks, cute dicks and tiny dicks. This is not your mamas after school special. Every episode ends with a bombshell, I’m like okay where’s my therapist.

They don’t sugar coat the REAL issues teenagers are facing in today’s modern age. Asshole people, being gay but you don’t want your dad to beat your ass, drugs, shitty parents and the need to feel loved are just a few issues this show addresses. The main character is Rue, played by Zendaya and if home girl doesn’t get an Emmy for her role I’ll snap. Drake is the executive producer so you know the music is LIT! Episode 4 music legit had me at the end of my seat I thought I was going to have a panic attack, MAD SUSPENSEFUL.

The show starts with the end of the summer and her just getting released from rehab. She OD’s on drugs and her younger sister discovered her. Shit was so sad! But they don’t just act like everything is fine and dandy, she immediately goes back to her shameful ways. Because lets be real, addicts can’t change over night, they need time. Her family wants the best for her, she wants the best for herself but she can’t get over the one thing that makes her happy, drugs.

She is the central character and narrator but it also involves other high school students as well. We have psycho ass Nate who is the typical rich, athletic douche bag who scares me but honestly lowkey turns me on. Wait till you find out who his daddy is! Jaw drop city. To be honest, he could verbally assault me any day! MEOW! Then we have his ex girlfriend Maddy who is the typical hoe character but I think we’ll discover a reason behind that. I always love the hoe characters because they remind me of my girlies. If dudes can get mad ass so can my girls! Equality ❤

Next, we have Kat who is the classic heavy set friend who thinks she isn’t pretty but girl you are! Skinny bitches are SO LAST YEAR. Embrace those curves, she has by far some of the best scenes. I die laughing every time she’s on screen because she is just so outlandish it seems unreal but it really happens. I’m trying to be hella vague because I don’t wanna ruin it but lets just say it involves old men micro-dicks. I almost threw up.

Lastly, we have my favorite character Jules. I live for her seriously. She is unapologetically herself. She gives zero fucks about what others think of her and I’m all here for it. She is the new girl at school and she starts the new school year off with a bang. She becomes friends with Kat, who invites her to a party where SOMEONE tries to be rude to her and she was NOT having that. Your first impression is EVERYTHING.

One thing about this show that makes me love it even more is how they have a transgender character who is just another character. They didn’t include her to get diversity points. Nor do they have her get jumped or killed from the start. They just let her be her and I love it. Other people struggles shouldn’t be a punch line. They don’t even come out and say she is trans until episode 3. I picked up on it early on because I notice the little things(you’ll know what I mean at the end of episode 1). I see a bright future for her in Hollywood.

This is what Hollywood needs to do in regards to transgender characters. Stop making them your punching bags or just one big joke. They are real people, not some shitty story line. What I love the most is so many guys don’t realize she is trans so when they realize it they have like second doubts about themselves. You’re not gay if you find her attractive, she is a girl damn it. She honestly is hella cute and adorable, I would tap it. I truly believe this character could help people understand transgender people better. Trans people are dying left and right because people are so uneducated on them.

Each of these characters have issues that I think is like the seven deadly sins: pride, greed, lust, envy, gluttony, wrath and sloth. Each character has these different issues because lets be real, it’s high school. Everyone had issues, my ass included. I live for shows like this because it shows people, you are not alone. Everyone is living in their own personal hell everyday. It’s nice to know you are NOT alone. We all wanna die 🙂

P.s. if you do watch this show, PLEASE message me so we can gossip on theories! I got mad after last week. I wanna beat Shyguy118’s ass.