I am beyond over American Companies legit taking it up the ass by China. Are we that pussy whipped by money? I understand y’all want that China market so bad, but is standing by why people are being kidnapped, murdered and their civil liberties are being taking away really worth it? I THINK NOT!

America is DAT BITCH when it comes to the global community. If we stand up to China, the rest of the world will as well. So when the NBA and Blizzard sent apologizes to China because people affiliated with their company spoke in favor of the Hong Kong protestors I was DISGUSTED!

Hong Kong is deadass fighting for their life and we are allowing China to portray him them as the enemies, NOT ON MY WATCH. Shit is getting hella cray cray and it does NOT seem like it’s going to be dying down anytime soon. I am afraid history may repeats itself and China will massacres all the protesters, like they always do. Will we continue to look the other way then?

Anytime people strive for change, China comes rolling on in with guns and tanks. Tienanmen Square is still an issue we don’t know much about because China acts like it didn’t happen. Just like my girlies when they hook up with their ex’s.

The Youth wanted change in China and held mass protests like they are in Hong Kong currently. When this hit a fever pitch China was quiet at first, then came rolling in with Tanks and Soldiers and literally killed hundreds of innocent civilians most around my age.

They used the soldiers to kill the people then they used the tanks to crush the bodies into mush so they can clean it up easier. That’s how barbaric china is, talk about an over kill. China is deadass scary. I am not afraid of Russia or North Korea, its fucking China that scares me. They basically kidnap anyone who speaks out against their government and throws them in jail for life, if they are lucky. Or ban them for life like they just did the South Park because last weeks episode dealt with the very same issue.

Side note, why is there no good documentaries on Tienanmen Square? I’ve searched and only found one old one from the early 1990’s, it was a hot mess but still informative. Ken Burns make one already.

With Hong Kong currently we are having Deja Vu all over again. But unlike before we now have social media on our side but for how long? China is making fake accounts left and right attempt to change the narrative to favor them, BOY BYE! You is NOT tricking my girlies and I. Twitter and Facebook have shut down a bunch of these accounts but still, China get a LIFE!

Every day we are able to watch horrifying videos and stories of legit hired Chinese gangs attacking innocent protesters. It’s like the Purge but less white. This protest started over China attempting to have Hong Kong pass a law that allows China to extradite Hong Kong citizens for crimes China accuses them of. Aka if China has beef with you and you live in Hong Kong, Good Luck! Your ass is grass.

Hong Kong used to be a China province then England took it over during the Opium Wars then gave it back in the late 1990’s. But it wasn’t fully given to China, instead it was its own state but China controlled who became its leader. Slowly over the years China is trying to completely take over Hong Kong and make it as oppressive as China is.

That is why this protest is so important. If we don’t help the protestors, China will take over Hong Kong and suppress the hell out of them. China controls all their citizens way of life. From what they watch on tv, read on the news and even post on social media. Communism is hell on earth. That is why I am so livid when American companies cave to China so they don’t piss them off. Those companies are basically saying they condone these actions by China. God and I are judging the hell out of you.

After the backlash NBA came out and said they do agree with free speech which makes it a little better but China has now announced they won’t broadcast any NBA games. GOOD RIDDANCE! Blizzard however is not backing down and thus proving they are GARBAGE. They banned the player for speaking in favor of Hong Kong and took away his prize money like how fucking rude and cold. The death of these protestors are on your hand dumbass money hungry slugs. 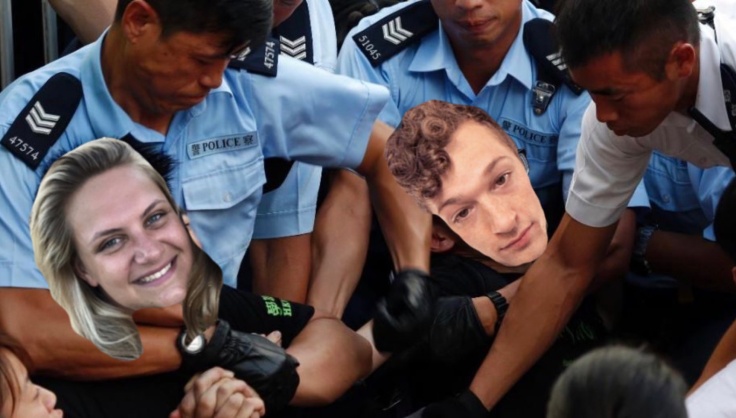