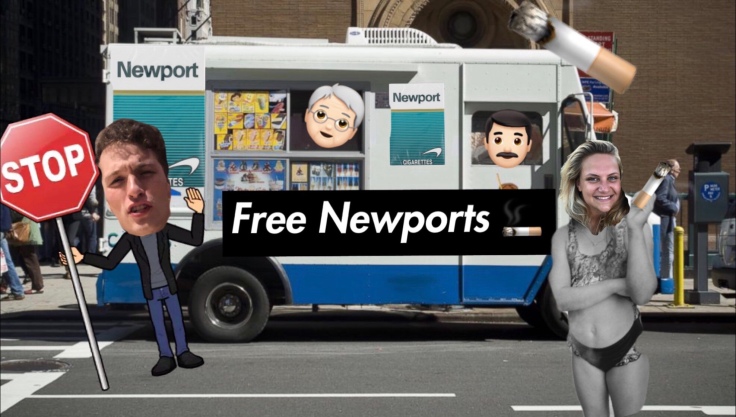 I don’t know if this statement is considered racist BUT, has anyone noticed that when its comes to cigarettes, Newports and the black community go hand and hand. They’re like Sister Sister. I legit have never seen a black person smoke anything other than Newports. No Marlboro Red 100s or Virginia Slims, just the good old fashion green box with the upside down Nike logo.

I wondered if this was just a coincidence or a sinister plan by corporate America. Well tickle me pink, it WAS a sinister plan by the company who first created Newports, Lorillard Tobacco Company. At first Newports were targeted towards male drinkers and wife beaters. What makes Newports different compared to other teeth rotters is the menthol. Which side note, is a ADORABLE baby name. Menthol make the cigs more addicting by making the throat hurt less, I think, I honestly don’t know. I don’t smoke cigs, I’m not a ghetto baby girl.

At first, Newports weren’t as popular as other brands on the market. So they decided to shift their target audience to the black community. How did they do this? First by increasing their African American advertising budget by 87% in 1968. But this wasn’t enough so what did they do next? Legit sent vans all around housing projects in low income areas, where instead of giving away books, clothing or food. Like they pieces of shit they are, they gave free Newport cigs to CHILDREN. How can they sleep at night?

This was only brought to light after evidence showed a deceased woman died of lung cancer. She only started smoking at the age of 9 after receiving free Newports from a creepy ass van while she was playing on a playground in Boston. In the end she won $35 million in damage but that’s only pennies compared to the billions they make each year. Think of all the young children affected by this sick program. They got addicted, then got their children addicted and thus on. This is legit the work of the devil. Of course it was only in majority black communities as well.

I thought I would be jaw dropped but at this point nothing shocks me. The lengths our government and corporate America have gone to destroy the black community is truly remarkable. Instead of helping them prosper and grow after the Civil War, the spent billions on slowly weakening them mentally and physically. Well obviously they don’t know black don’t crack!

Black smokers are down but the number of Newport smokers are still high in the black community. As of 2016 over 60% of black smokers say they prefer Newports. Its the menthol that makes them popular, over 80% of black smokers prefer menthol cigarettes compared to normal. Newport is now owned  R.J. Reynolds. They own almost all major cigarette brands. So yeah they’re in the business of murdering. Newport still targets the black community by having lower prices and more advertising for Newports in urban areas. And like that’s according to Stanford so like yeah its legit and not fake news.

Whats even scarier is now Newport is shifting its focus to the younger market. Which is not shocking, because Newports are the cancer stick of choice to all my ghetto baby girls. They know not to smoke that shit around me cause ill freak. Newport is now appearing at EDM festivals with “Newport Pleasure Lounges” where you can get cigs for a dollar! So spunky and cute right! Party and die all in one place! Sounds fucking lit man! In 2016 alone they spent $50 million on events like this and other random bullshit.

Can Newport and cigs altogether just die off already? How the hell are they legal and weed isn’t? Weed ain’t harming anyone besides the buffet line at Golden Corral. Cigarettes on the other hand are LEGIT killing over 480,000 people each year. And our government allows that? Is this a secret form of population control? Am I saying too much? Will they send someone to take me “out”.

Xoxo if you smoke around me I will SHAME the hell out of you. Green smoke only in these lungs baby